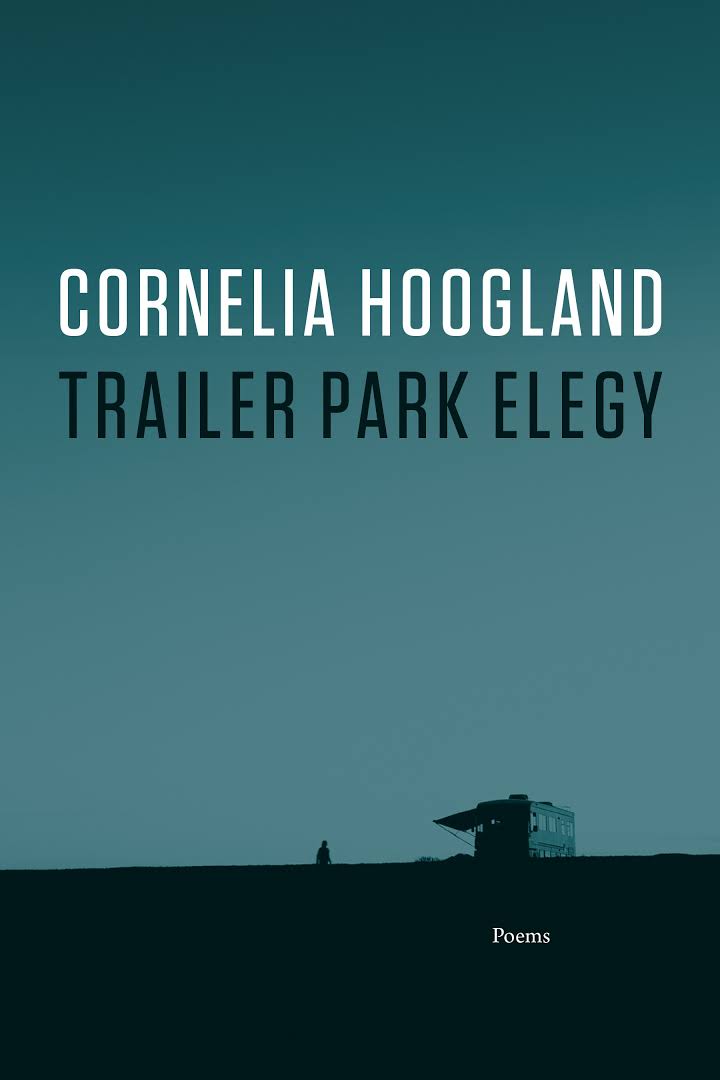 The last words of William Grootendorst, spoken to the stranger who came to his aid after his truck slipped on black ice, were “thank you.” William’s sister, poet Cornelia Hoogland, weaves these last words into Trailer Park Elegy (Harbour Publishing, 2017), a long-form verse meditation on the panorama of grief experienced in William’s absence. “Thank you” becomes one of many verbal leitmotifs that furbish Hoogland’s dynamic and deeply-moving verse, which reminds its readers with recurring sharpness that:

is spoken on the exiting

can ride the exhale.

These lines manifest traits characteristic of Hoogland’s verse: powers of observation about the quotidian, empathy, generosity, and the interplay of conflicting realities. Throughout this long poem, grief is seen in the tension between sound and silence, motion and stasis, and in the existence or permeability of membranes between the living and the dead. These membranes can be as treacherous as black ice, or as impassive as the framed picture through which a mother converses with her dead son.

Trailer Park Elegy is Hoogland’s seventh full-length collection of poetry, and was shortlisted for the Raymond Souster Award. As a long-poem elegy, it reflects a tradition of notable works such as Alfred, Lord Tennyson’s In Memoriam A.H.H, Peter Sacks’ Natal Command, Douglas Dunn’s Elegiesand Mary Jo Bang’s Elegy. Elegy is difficult to define as a genre, encompassing registers of content, style and tone. Where elegy is concerned with death or loss, it often pits the personal against the cosmic, and shows a speaker or protagonist grappling with manifold concepts in search of “consolation.” Trailer Park Elegyobserves such generic expectations, connecting the personal grief experienced by William’s family to a range of impersonal phenomena, including geology, dark matter, chaos theory, atmospheric conditions, and noise pollution. The narrative is nonlinear, tracking William’s and Cornelia’s lives from childhood onwards, and creating a book that repeatedly asks us to look again, to reread in light of new discoveries.

Our introduction to William’s own voice occurs when he calls from rehab, at a moment suggestive of both triumph and tragedy. He begins with “Hey”, and ends with “No, wait, it gets better.” Dramatic irony is here used artfully: while readers know of the tragedy to come, we are drawn in to learn about William’s life and experience the cathartic beauty of knowing him. The monosyllabic negation “No” becomes another sonic leitmotif in Trailer Park Elegy, resisting the search for consolation. “No” is the sound that “erupts from my tea thermos/ when I loosen the stopper.” At funerals the author witnessed as a child, there is a “weighty/ silence of black limousines,” tires on puddles say “shhhh”, and the sound of mourners is “seismic,” falling into the “No River.” Hoogland brings the suspension that “no” implies closer to the reader in an unforgettable image of rain: “O it’s quiet. Even the rain/ is hyphens.”

This book brims with memorable and surprising sonic effects, from poems rich with Anglo-Saxon alliterative and syllabic influences to lovely assonance and internal rhyme during descriptions of the seemingly mundane, such as the trailer park with its “sodium moon over a public washroom.” Sounds morph and shift in significance, reworked in later sections and contexts. In the first pages, “Rusty leaves fly at vinyl siding,/ rattle at RV windows” in the trailer park. Vinyl’s potential to create or contain sound is reworked in a later image:

Did musicians regret the end of vinyl, and the halfway pause plotted

into their albums for turning the record,

starting the second side?

Rereading this long poem is extremely rewarding; we become involved in a form of echolocation, making connections between allusive words and symbols, even as the poet and her brother are compared to whales using echolocation to find each other.

Symbol and sound are often presented through framing devices, encouraging us to dig deeper, and blurring our assurance of what can be heard from the deceased. Within those frames, sounds meaningfully directed at us become difficult to distinguish from noise pollution, as orcas strain to hear each other above the underwater acoustics of container ships. Black ice, for example, comes to us as a newly-minted term through newscasters on TV, in a scene when William is only four years old: it is a filtered warning, memory and prophecy at once.

Occasionally, themes and tropes recurred more often than seem to me necessary or preferable. The result of these surplus repetitions was an occasional sense of artificiality. As a mediaevalist, I was particularly troubled by three separate allusions made to a well-known scene of a bird’s short-lived flight through a mead-hall as a symbol for the transience of human life, which Hoogland places in the poem Beowulf or refers to as “Beowulf’s sparrow.” In fact, this symbol of the sparrow appears, not in Beowulf, but in Bede’s Ecclesiastical History of the English People, where it is used to illustrate the necessity of religious conversion. Repeated misattributions are disconcerting in any published work.

The best elegiac writing invites readers into a loss that is both communal and personal, and journeys among divergent circumstances in its search for consolation or meaning. Trailer Park Elegy achieves these effects as it voyages through time, place, method of travel, and memory, leaving us to question what kind of progress is possible after a great loss. The speaker finds herself as a ‘Still Life with Airbag‘ in her car, searching for a route and unable to refold a map. Readers too are drawn into the exits and entries of this compelling work, retracing the routes it has mapped out, finding ourselves brought forward and stopped short. We are grateful to Hoogland for bringing us to the trailer park: the location where William once lived, and a symbol of the migrant graveyard where memory rests.

Emily Osborne is a Poetry Editor for Pulp Literature. She is the author of ‘Devonian’ (Pulp Literature Issue 17, Winter 2018), and was an honorable mention in Contemporary Verse 2’s 2017 Young Buck Poetry Contest. Her chapbook Biometrical was recently released by Anstruther Press. In addition to being a poet, Dr. Osborne is also a researcher and translator. She has taught mediaeval literature and poetics at Cambridge and UBC, and published several scholarly articles.

Subscribe on Patreon for as little as $2 a month Become a Patron!

What people are saying